What started in 1894 as a one-man business making mineral waters, was later acquired by Edward Carter.  The original premises, between top and middle twitchells was a small, 2-story brick building dating back to the early/mid-19th century and originally used as a lace workshop.  After the second world war the business was bought out by A. J. (Tony) Marmont, after which it grew steadily until its premises occupied a large part of the old village.

In the late 1990s even this area was becoming too confined, and Carters moved to a greenfield site at Kegworth. The Sawley factory was demolished in 2000 and its site became a residential development ‘Churchfields’.

Carters had a local rival in the 1930s – Cowburns Mineral Water factory of Grosvenor Avenue. 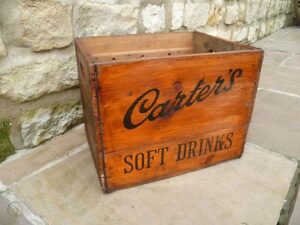