Until the late 18th century, most farming was organised on the open field system.  Arable land in the area was usually divided into 3 or 5 large open fields.  Villagers held scattered strips, the idea being to share the good and poorer land.  The same crop was planted throughout a field and one of the fields was left fallow.  Villagers all had grazing rights on the fallow field, on the stubble after harvest and on the meadow land along the rivers.

All the villagers helped with the harvest, often without being paid.  They started between 3 and 4am and carried on until dusk, with a rest for lunch.  Gleaning the stubble allowed the poor to store the leftover grain for the winter, to be made into frumenty, which was something like porridge.  The harvested grain was milled at the windmill near Wilsthorpe (now the north end of Hawthorne Avenue).  Stray animals were placed in the pinfold on Cross Steet.

Although some of the Earl of Harrington’s land was already enclosed, the Sawley Enclosure Act of 1787 divided 800 acres of open fields between 35 people, though most of these had less than 10 acres each.  The Lord of the Manor (Earl of Harrington) was allocated over 200 acres.  John Towle of Sawley received more than 100 acres.  The enclosure acts disadvantaged poorer farmers but did improve farming efficiency and provided surplus food and labour for the industrial revolution.  They also created the hedgerows that now characterise the English land.  It was noted at the time that the fields near the Trent were never ploughed but kept as pasture as it was thought that better cheese was produced from cows fed on natural grass.   Sawley and Wilsthorpe both had pigeon houses (for meat).

In medieval times only oxen* were used to pull ploughs and carts. They were gradually replaced by horses, especially after the Enclosure Acts, as it was much easier to turn a team of horses round in the smaller fields created by enclosure.  So the change from oxen to horses probably happened in Sawley in the late 18th century.

By 1827 Sawley had 14 farmers, including 3 generations of the Smith family.  In 1851 there were 18 farmers, with 74 men and boys and 6 women and girls employed in farm work.  Some of the farmers had other jobs, including baker, grocer, maltster and innkeeper.

(*) Oxen are bullocks trained as draft animals.  Oxen is the only remaining English word that still uses the original Anglo Saxon plural suffix ‘en’ instead of ‘s’  (although ‘children’  uses a version of it). 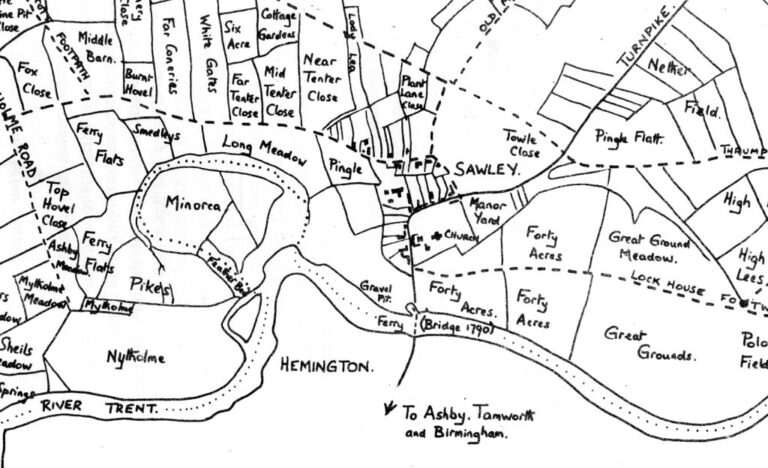