Joseph Maddocks was born in Ratcliffe on Soar c1861.  In 1895 he married Harriet Armison from Sawley.  She was about 11 years younger than Joseph and already had a 2-year-old son, Frederick Albert Armison (born in 1892 in Shardlow, possibly in the local workhouse) and a baby daughter, Dorothy Ann Armison (born 1895).

Joseph and Harriet lived in Hey Street and had 3 more children:

Frederick and Dorothy were usually known as Maddocks.  In 1911 the family were living at 38 Hey Street.  Joseph was a bricklayer’s labourer, whilst Dorothy and Frederick were working in lace factories.

By 1914 the family had moved to 21 Hey Street.  When Britain declared war on Germany on 4th August,  Frederick was already a volunteer with 1/5th (Territorial) Battalion, Sherwood Foresters Regiment.  The territorial soldiers were immediately called up and sent to Harpenden (between St Albans and Luton).  However, on the night of 31st Aug/1 Sep, Frederick died of pneumonia.  He was buried at St Mary’s Church cemetery in Luton.

Editor’s comment – Having served in the successor Territorial Army unit (3rd Worcestershire & Sherwood Foresters) I’m sure  the training at the outbreak of the war was arduous, but Frederick must have known he was ill when he reported for duty. 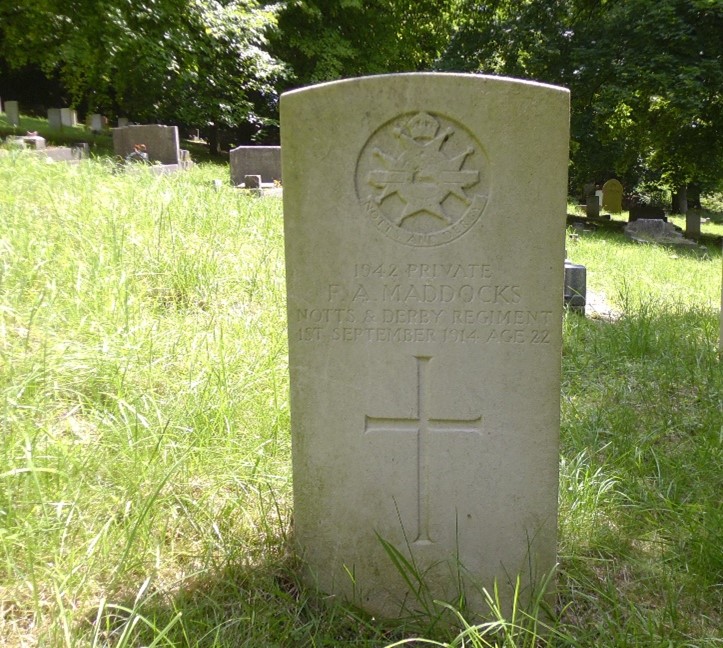 After the Great War, Wilfred (Wilf) started working for Charles W Hall, a Long Eaton butcher.  In 1933 Hall committed suicide in the ballast hole at the end of Mikado Road and Wilfred was called as a witness in the coroner’s hearing.  In 1939 he was still living at 21 Hey Street, with his widowed mother.  He was still a butcher.  He later moved to 32 Hey Street.  He died in 1978.