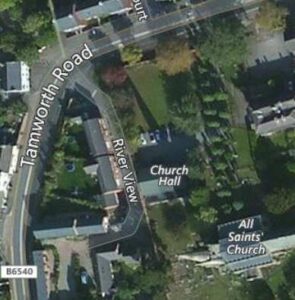 
Annual General Meeting: followed by Shardlow historian Jeff Clifton who will give an         illustrated  talk about The  Heritage of Shardlow, our neighbour across the river.

Lace Factories in Long Eaton: Member Keith Reedman will talk about the conservation  of lace factories alongside the Erewash Canal, outlining the development of the industry in  the town and looking at the decline of the Leavers lace machine.

The Fitzherberts of Tissington Hall: a return visit by Ruth Jordan to talk about another prominent Derbyshire family, the Fitzherberts.

The Framework Knitters of the East Midlands: popular speaker Dr Wendy Freer tells the history of another local industry of our past.

Ruddington Framework Knitters Museum: First of our outside venues. An evening visit to this interesting museum linking with Dr. Wendy Freer’s talk.

Tissington Hall:  Ruth Jordan will escort us round this ancient Derbyshire house, the
home of the Fitzherberts. An evening visit.

Harborough Museum: Following up last year’s talk on the Hallaton Hoard, we take an  evening trip to the museum where some of the treasure and other artefacts found in the  local area are displayed.

The British Horological Institute: A morning visit to Upton Hallfor a talk and tour of this fascinating collection of timepieces. Afternoon free to visit either Southwell Minster or the Workhouse, or both if you have the energy!

Society’s Exhibition to be displayed in the Church Hall over the August Bank Holiday, in conjunction with Sawley All Saints Church Annual Flower Festival.  Open 10 am to 6 pm.

‘Time Gentlemen Please’:  Start of evening meetings again. Rod Pearson takes a
humorous look at the ways we have recorded the time in the past.

29th November 2010 – Goings on below stairs
Dr Wendy Freer returned to give us another of her popular tales of how people used to live and work in “the good old days”.

25th October 2010 – Byron and Newstead Abbey by Professor John Beckett
John Beckett gave an informative and entertaining presentation that challenged and illuminated many of the groups’ preconceptions about the life and times, and also the loves and death, of George Gordon, the poet Lord Byron. Particular mention was made of the lasting reputation and influence of Byron on the political life of Greece. The peculiarities of Byron’s forerunners at Newstead and the interesting lives of his mother and uncles were also featured.
The evening ended with Professor Beckett giving informed answers to a wide range of questions from the audience.

27th September 2010 – History of Sawley, part 3
Geoffrey Kingscott continued his story on the specific topic of “Rivers, Cuts and Canals: Sawley as a centre for waterways navigation”.

23rd August 2010 – Hemington/Lockington Walk
Graham Grammer lead a walk along footpaths and lanes in this quiet corner of Leicestershire.

26th July 2010 – Breedon and its Church
Mrs Ida Wright gave an evening tour of the Church and a brief history of the village.

28th June 2010 – Newstead Abbey
An afternoon trip for an introduction and tour of Lord Byron’s home. Taking in the rooms Byron used, remains of the 12th century Abbey and the gardens.

31st May 2010 – Lichfield
Bank Holiday coach outing to this historical town for the Cathedral; crowning of the Bough Queen; birthplace of Samuel Johnson; and the National Arboretum.

26th April 2010 – Old maps of Derbyshire
Dr Robin Trotter, a local GP with a fascination for old maps of the county, used maps to show the history and development of our area.

22nd February 2010 – An alignment across Sawley
Eric Sargeant, member of the Society and an Associate Lecturer with the Open University, speculated about the significance or otherwise of Ley Lines and considered the possibility that the orientation of churches and castles in the area around the Trent, Derwent and Soar junctions might indicate deliberate planning.

25th January 2010 – Annual General Meeting followed by “Scotch on the Rock”
The Society’s Annual General Meeting on Monday 25th January showed it to be in good health with a membership of about seventy. The accounts and officers’ reports were accepted and an election slightly enlarged the committee.
As is customary at the AGM the evening’s talk was given by one of our own members. This year Barry Cope gave an illustrated presentation entitled “Scotch on a Rock”. This covered the wreck early in the Second World War of the SS Politician, which was carrying a quarter of a million bottles of untaxed whisky, in the Sound of Eriskay in the Outer Hebrides. The true story, involving the imprisonment of a number of islanders from Barra, South Uist and Eriskay for “liberating” the cargo was contrasted with the light romantic novel “Whisky Galore” and the film adapted from it. Barry ended the talk by showing a bottle from the wreck that he uncovered on a beach in Barra last year.

30th November 2009 – “Two Queens and a Countess.”
The last talk of 2009 was given by David Templeman and was a fascinating tale of loyalty, policy, treachery and intrigue in sixteenth century England. Henry VIII and his wives, son Edward VI and daughter Mary were given due consideration, but most of David’s time was taken up with with an examination of the relationship between Elizabeth I of England and Mary Queen of Scots. The alliances of the two women and the pressures applied by the churches, the women’s suitors, and in Mary’s case husbands,and the various court factions and parties was considered. Special attention was given to the rise, marriages intrigues, power, and ultimate failures of Elizabeth, Countess of Shrewsbury (Bess of Hardwick). These were indeed “interesting times”.

26th September 2009 – Sawley Township Charter Day
The celebrations, on Saturday, September 26 2009, of the 750th anniversary of the Sawley Charter provided Sawley with a day to remember.
The Charter, granted by King Henry III in 1259, gave the Bishop of Coventry and Lichfield, who then held the manor of Sawley, the right to hold a market once a week and a fair once a year. This effectively turned Sawley, at that time the largest village into the area, into a township.