The Meads family connection with the local area goes back hundreds of years.  For example, Hugh Meads of Hopwell (near Risley) married Dorothy James of Draycott in Sawley in 1682.  A century later in 1785 one of their great grandsons, Joseph Meads, a weaver in Sawley, married Sarah Fryer and had 11 children, including Thomas and Zachariah.

Thomas Meads (born 1793) worked as a framework knitter and then a railway labourer.  He married Dinah Spencer and lived on Church St.  Their 9 children included Thomas (born 1821) who married Frances Willcocks.  He became a general dealer and then a coal merchant and farmer at East End.  Their 8 children included Mary (born 1865) who married Arthur Kingscott and Albert (born 1862).  Albert’s grandson Gordon Hobday (born in Harrington Street in 1916) became a scientist who worked on the development of penicillin and later became the chairman of Boots, Chancellor of Nottingham University and Lord Lieutenant of Nottinghamshire.

Zachariah (born 1801) became a shoemaker on Back Street.   One of his grandsons was also called Zachariah Meads (1863-1952).  He lived in Victoria Street and worked as a blacksmith on the railway.

The elder son of Zachariah Meads (1863-1952), John Arthur Meads (born Sawley 1893) earned a BSc Honours degree in Chemistry at University College Nottingham in 1912.  He was pursuing postgraduate study when war broke out in 1914.  He joined the Sherwood Foresters and was commissioned in Dec 1914, joining their 10th Battalion, and was sent to France in Aug 1915.

The following month he earned the Military Cross, leading his men in a bombing (grenade) attack at Sanctuary Wood, near Ypres.  He was also mentioned in despatches and was twice wounded.

While home recovering from wounds in Mar. 2017 he married Dorothy Gladish, a fellow student he’d met while he was Secretary of the Students’ Union.

Due to his injuries, John had the option of leaving the army but chose to return to France in the summer of 1917.  He saw intense combat again and was killed by a direct hit from a shell on his way to support lines near Hazebrouck, Belgium on 10th Oct 1917.   He was 24 years old.  He received a posthumous promotion from Captain to Major. 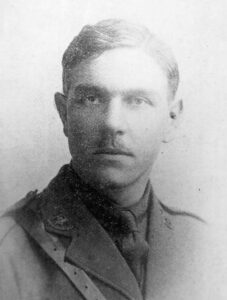